Summer is synonymous with vacation, rest, sun. But also hot flashes that exacerbate the risk of being hospitalized for a heart condition and dying from it.

And with climate change, these periods of extreme heat are becoming more frequent and intense. They are then accompanied by an increase in the number of hospitalizations and deaths, especially among the elderly, among people suffering from cardiovascular diseases and even more among people who belong to both categories.

In a society where air conditioning is not accessible to all, for economic and spatial reasons, what practical and inexpensive cooling strategies are available for these at-risk populations?

Daniel Gagnon, professor at the University of Montreal’s School of Kinesiology and Physical Activity Sciences, tries to clarify this.

As a researcher at the Montreal Heart Institute’s EPIC Center, he is interested in the reasons that contribute to the increase in cardiovascular disorders during hot flashes and in simple and effective interventions to minimize the physiological consequences of heat exposure.

In a previous study, the researcher and his colleagues at the University of Sydney, Australia, demonstrated that in a hot and humid environment the fan is effective for cooling, while in a hot and dry environment water vaporization would be the preferred method for cooling. lower your temperature.

This summer, they’re trying to clear up another common practice, not yet scientifically proven: soaking your feet in water. 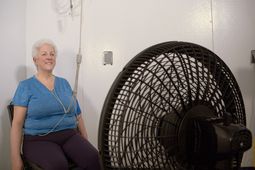 The protocol will be the same as in the previous study: subjects over 50 years old will spend three hours in a climatic chamber that recreates in one case scorching and humid conditions (38°C and 60% humidity) and in the other, scorching and dry conditions ( 45°C and 15% humidity).

Initially, the participants will not undergo any intervention aimed at cooling them down, only the physiological responses related to heat exposure will be recorded – heart rate, body temperature, sweat production, heat perception.

As before, the Australian researchers are interested here in healthy elderly people, while the Montreal researchers are carrying out their study with people suffering from heart problems, considering that heat makes the heart work.

“During a heat wave, the body undergoes physiological stress,” explains Daniel Gagnon. The blood vessels under the skin expand, so there is more blood flowing through them. To meet this demand, the heart has to work harder, so the heart rate increases. In our experiments, we’ve seen that simply sitting in the heat can cause your heart rate to increase by 10 to 20 beats per minute. And there’s also perspiration that comes into play.

In the long term, the professor adds, sweating can lead to dehydration and even kidney failure, while the heart’s work can quickly become problematic in people living with heart disease. The risk of fatal heat stroke then becomes very real.

Potentially effective regardless of humidity

Daniel Gagnon points out that, in a humid environment, the evaporation of sweat is limited – hence its cooling effect as well. Therefore, increasing air circulation with a fan improves evaporation.

On the other hand, in a dry environment, sweat evaporates easily. A fan, therefore, does not promote evaporation, but increases the heat gain of the environment. Water vaporization then becomes relevant, as it plays the role of artificial sweat allowing the body to cool off.

The professor-researcher believes that footbath will be beneficial in both types of environments, but even more so if combined with the previous strategies. “By soaking your feet in cold tap water, the blood that circulates under the skin will be able to better release heat to the water,” he says.

In the end, regardless of the results, the study by Daniel Gagnon and his colleagues will make it possible to make science-based cooling recommendations based on the type of heat wave. A valuable asset in higher risk environments where there are no air conditioners.