We use it several times a day without necessarily being aware of it: emotion regulation is the process by which we manage to attenuate disturbing stimuli in order, for example, to maintain focus, improve our well-being or respond better. requirements of your environment.

Emotion regulation plays a key role in many mental illnesses as well as their treatment, whether it be anxiety disorder, mood disorder, or borderline personality disorder.

And this regulation is associated with the action of theta waves in a specific region of the brain, the frontal cortex.

This was observed by Inès Zouaoui, who is completing her master’s degree in psychology at the Université de Montréal, as part of her research carried out under the direction of Professor Marc Lavoie, from the Research Center of the Institut universitaire en santé mind de Montreal.

Based on the results of a study* published in 2013 that revealed the presence of theta waves in emotion regulation, the Montreal research team put 24 people through a cognitive reappraisal test.

“Cognitive reappraisal, which consists of reinterpreting the context, is a voluntary strategy to understand emotion regulation in an experimental situation”, explains the researcher. Our goal was to decipher the electrocortical mechanisms that accompany these complex processes.”

For this, electrodes were placed on the heads of these 10 men and 14 women to record the electrical activity of their brains in the face of various aversive images, such as a man armed with a knife or a threatening dog.

As the electroencephalograph continuously quantified and recorded frequencies of brain activity, subjects were instructed to increase, decrease, or maintain their aversion state, as appropriate. This process also refers to cognitive reassessment. After a few seconds, the image disappeared and the emotion regulation phase faded.

“The electroencephalogram analyses, more advanced than in the previous study, compared certain frequencies observed during the cognitive reassessment, which allowed us to observe that only theta waves – which oscillate between 4 and 8 hertz – were triggered in the process, which makes it a marker of emotional regulation”, underlines the person who is going to do a PhD in biomedical sciences, Psychiatric Sciences option, at the University of Montreal in the fall.

Furthermore, the addition of electrodes made it possible to locate the areas that produce these theta waves in connection with emotion regulation, that is, the frontal regions involved in cognitive control. 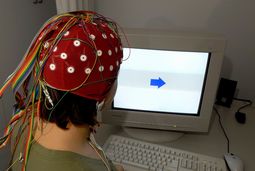 The electroencephalogram also made it possible to locate the areas that produce theta waves related to emotion regulation, that is, the frontal regions involved in cognitive control.

In addition to the desire to repeat a previous study to broaden the scope of the scientific review in this area, Inès Zouaoui hopes that her experience can eventually be used in clinical practice.

“The relevance of theta oscillations as a marker of successful regulation may lead to new therapeutic options for the treatment of people whose emotional regulation process is impaired”, he concludes. This is particularly the case for those who suffer from severe anxiety or schizophrenia.