Daniel Jutras, dean of the University of Montreal

The main motivation for the mission to Paris of the rector of the University of Montreal, Daniel Jutras, was the official opening of the UofM’s Europe Office, which has been operating in the French capital since January. A cocktail party was organized at the official residence of the Embassy of Canada, in the presence of representatives from the French-Canadian higher education, research, world of arts, culture and diplomacy sector. Valérie Amiraux, vice dean of community and international partnerships at the University, and Michael Pecho, vice dean of alumni relations and philanthropy at UofM, accompanied the dean.

A representative and liaison office as a privileged local tool

During his five days in France, the Rector made a point of visiting the Office’s premises. He was able to talk at length with its director, Isabelle Lépine, about the role of this new unit in the internationalization of the University of Montreal. In order to become the most influential French-speaking university in the world, the establishment must innovate, think outside the box, focus on excellence where it is, where it has not been or was not very present, in a strategy of openness and diversification. That’s why the dean went to discover Estação F, this campus with 1,000 youngsters from Halle Freyssinet, or the Learning Planet Institute, an interdisciplinary training and research establishment that aims to mobilize collective intelligence at the service of sustainable development and social impact. The dean was also able to dialogue in a privileged way with various actors from the world of research and community action focused on students who helped to improve his knowledge of the European context and to nourish his vision. 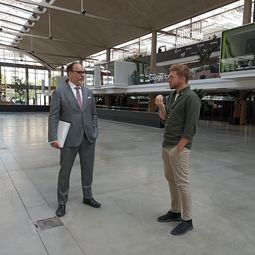 This mission was also an opportunity to organize a scientific activity that brought together five French and Quebec researchers. The conference entitled “Franco-Quebes’ opinions on academic freedom” highlighted the expertise acquired by UofM on this topic through the Rector’s Mission on Freedom of Expression in the University Context, chaired by Valérie Amiraux. Thanks to Vardit Ravitsky and Christian Nadeau, respectively from the School of Public Health and the Department of Philosophy at UdeM, who traveled from Montreal, these perspectives from Quebec were shared and discussed with Gwénaële Calvès, professor of public law at the University of Cergy-Pontoise, Charles Girard, professor of philosophy at Jean Moulin University – Lyon 3, and Nonna Mayer, director of research emeritus of the National Center for Scientific Research linked to the Center for European and Comparative Policy at Sciences Po and member of the Committee in Support of Fariba Adelkhah. A video rebroadcast of this activity will be available online soon.

A network of committed graduates

Finally, this mission will have allowed the rector to meet the Parisian graduates of the University of Montreal, who responded massively to the evening organized at Gowling WLG at its premises in the Opéra district. His desire to “give something back to the university that gave us so much” delighted the Montreal delegation, which thus saw the very strong capital of UdeM’s sympathy among its alumni. The contacts made or renewed, tinged with frankness and cordiality, suggest encouraging perspectives for the future of UofM in Europe and in the world.